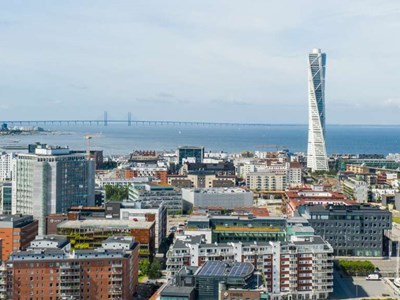 On 23 May 2005, Wihlborgs Fastigheter AB is listed on the "O" List of the Stockholm Stock Exchange.

In 2006 Wihlborgs acquires 14 properties in Malmö from Tornet. The properties have a total lettable area of 182,000 m2. In June, Wihlborgs acquires 40 percent of the shares in Ideon AB. The acquisition includes the property Betahuset (kv Vätet 1), with a total area of 24,000 m2. In May, a 2-for-1 share split is carried out, in which two new shares are issued for every existing share held.

In 2007 Wihlborgs continues to invest in the Ideon district of Lund, opening its fourth local office there. Wihlborgs launches a share buy-back programme.

In 2008 Wihlborgs acquires the Scandinavian Center property in Malmö, with a total area of 8,000 m2.

In 2009 Wihlborgs acquires the Gängtappen building in the Dockan area and the SVT building in the adjacent Varvsstaden area. We acquire the remaining 60 percent of the shares in Ideon AB.

In 2010 Wihlborgs, in partnership with Peab, wins the contract for the MAX IV research facility in Lund, and on 22 November, the first earth is turned. In central Helsingborg, the Knutpunkten centre, measuring 18,500 m2 of offices, travel centre, shops and restaurants, is acquired. The Bytarebacken 39 property in central Lund, with a total area of 15,400 m2 of shops and offices, is acquired.

In 2011 the AGM approves a 2-for-1 share split. The first day of trading in shares after the split was Monday 23 May. The number of shares outstanding and registered increased to 76,856,728. Wihlborgs avails itself of a new channel of financing, in the form of part-owned property finance company Svensk FastighetsFinansiering AB. During the year, Wihlborgs starts out on its biggest single newbuild/redevelopment project, Landsdomaren 6, in Lund.

In 2012, the Media Evolution City project in Dockan is completed. The project is a property of 7,600 m2 and a centre for various businesses in the media sector. The Baltzar City building in central Malmö is acquired at a cost of SEK 473 million. Two properties are acquired in Denmark in Wihlborgs' sub-region Herlev/Ballerup. The Magasinet project near Malmö Central Station is completed.

In 2013 Wihlborgs acquires the remaining ten properties in Ideon and thereby becomes sole owner of the whole of the Ideon Science Park. Wihlborgs' biggest single newbuild/redevelopment project, Landsdomaren 6, Lund, is completed and Psykiatri Skåne (the Skåne Psychiatric Service) moves in.

In 2014 Wihlborgs strengthens its presence in Danish Ballerup through the acquisition of four office buildings of 39,000 square meters and now has a total of 155 000 sqm in Ballerup and Herlev. Wihlborgs also acquired the property Terminal 3 (Knutpunkten) in the central of Helsingborg and is the now the sole owner of the entire property consisting of train, buses and ferries.

In 2016 Wihlborgs begins construction on the Sirius office building in Nyhamnen in Malmö and of Posthornet in Lund. The Knutpunkten extension in Helsingborg is fully let and ready for occupancy. Wihlborgs strengthens its Copenhagen presence through the acquisition of 13 properties, comprising a total of 100 000 sqm. The renovation of the Gängtappen property is completed and Länsförsäkringar Skåne becomes the first tenant to move in.

In 2017 Wihlborgs begins construction on two office projects in Hyllie: Dungen and Origo. In Denmark Wihlborgs strengthens its presence through the acquisition of a total of 16 properties comprising 175 000 kvm. In Dockan, a 2,200 sqm extension of Kranen 9 begins, with 1,500 kvm designated for Tyréns. At the year-end, the office building Sirius in Nyhamnen In Malmö and the Ubåten multistorey car park are completed.

In 2018 the Posthornet office building next to Lund Central Station becomes ready for occupancy. At the Annual General Meeting on 25 April Wihlborgs' CEO Anders Jarl. is elected Chairman of the Board. Ulrika Hallengren takes over as new CEO. Malmö University signs a lease for 9,000 m² at Kranen 2 in Dockan, Malmö. The premises will be used for training police officers starting in 2019. In Lund, Wihlborgs acquires Nya Vattentornet 3 comprising 21,700 m² of primarily office space. In Helsingborg the first earth is turned for Prisma — Wihlborgs’ new office building in the Oceanhamnen district.

In 2020, the year begins with a property acquisition in Denmark, Banemarksvej 50 in Bröndby with 19,600 sqm, and in October another acquisition is made - Baldersbuen 5 with 6,900 sqm. The year is also marked by the corona pandemic and its effects, where Wihlborgs tries to find sustainable solutions for tenants and also continues to invest in the region. During the year, occupancy begins in, among others, Medeon Science Park's new building and the Prisma office building in Helsingborg.